Our platform InVirtuo participates in the ANR EQUIPEX + CONTINUUM (Collaborative continuity from digital to human) led by Michel Beaudoin-Lafon (Professor at Paris-Saclay University). The project is financed with 15.5 M€ starting January 1st 2021 for 8 years. 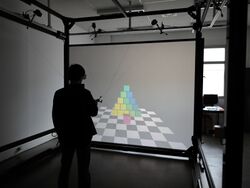