Difference between revisions of "Main Page"

Geometry is the core of the IGG group (Computer Graphics and Geometry) activity as in other national and international computer graphics research groups. Within IGG, all researchers share the same vision of object representation. This vision separates the topological representation, or more generally the combinatorial aspects, from the embedding representation defining the geometry. This vision is the source of originality and strength of the research whithin the group.

Research, within the group, explore geometry and its involvement in shape modeling with adaptive combinatorial models, multiresolution, embedded with subdivision surfaces. Tactics for formal specification, resolution of geometrical constraint systems and geometry proofs are also developped. It leads to new problems for rendering and interaction in virtual environments and its applications reside in fields such as medical simulation, currently supported by the IHU MIX-Surg project in which the IGG group is an active participant.

The IGG group aims to define efficient geometric models, taking into account a wide range of data (constraints, medical imaging, digitization, motion capture), to conceive and reproduce the shape, appearance and movement of 3D objects for visualisation and interaction. These goals are articulated around three complementary themes : 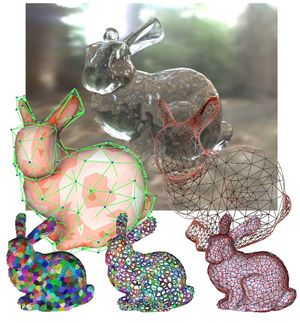 The IGG group is the first computer science research group of Strasbourg. Jean-François Dufourd and Jean Françon are at the origin of its creation during the eighties. In 1984, the team gave birth to the Computer Science Research Center (CRI, JE CNRS 91-92) which joined the LSIT (URA CNRS 1207) to form the LSIIT (URA CNRS 1871) in 1994. Ten years after, in 2013, the LSIIT, by fusion with engineering science laboratories, formed ICube laboratory in the fields of engineering science and computer science.

During the nineties, the research group was already well known for its pioneering research lead by a dozen of teniors. Then, an almost complete renewal of its members occured due to the departure of many researchers. They integrated laboratories in Poitiers (Eric Andrès PR, Yves Bertrand PR, Laurent Fuchs AP, Pascal Lienhardt PR), in Limoges (Djamchid Ghanzanfarpour PR) and Clermont-Ferrand (Jean-Pierre Réveilles PR). The discrete geometry and mathematical morphology thematics of the group have been reassigned to the MIV group of the LSIIT. More recently, Jean-Michel Dischler returned from Limoges to become professor of the group in 2001 and 8 new assistant professors have been integrated during the 2000s; 3/4 of them did not defend their Ph.D. within the LSIIT and come from the LJK (Grenoble), the LIRIS (Lyon) and the INRIA (Nancy, Nice, Orsay).

Since the late 2000s, the strength of the team is stable with no significant changes except the arrival of Stéphane Cotin, DR INRIA with its research team INRIA MIMESIS which involved David Cazier.